I am frequently corrected by my colleagues and mentors when I allude to patient satisfaction in the context of the Triple Aim. [Berwick] They promptly remind me that the Triple Aim refers to patient experience, which is an appropriate correction. Although precision is important in referencing literature, I purposely allude to patient satisfaction because it underscores a fundamental difference between consumerism and clinical practice.

Patient experience questions attempt to objectively assess the patient’s interaction with the healthcare setting. These types of assessments try to avoid value judgments and the effects of existing expectations. [www.NHFCA.org] An example of an experience question includes “In the past year, how times you have to wait for an doctor’s appointment?”

Conversely, patient satisfaction surveys focus on the patient’s subjective interpretation of the value they derive from their healthcare experience. These questions are similar to the type of data collected in market or customer research. An example of a satisfaction question includes “How do you rate your doctor’s office on their timeliness of getting you an appointment?”

Although it is important to have the objectivity of experience surveys for comparison purposes, I think the subjectivity of patient satisfaction is essential for testing whether a healthcare product or service is solving a subjective problem for the patient. If healthcare is considered a product or service that a patient has a choice to purchase by exchanging a scarce resource like money, time or attention, then patient satisfaction may be a better measure of that exchange of value. Using patient satisfaction rather than patient experience opens the door for consumer-centric approaches to improve healthcare delivery and make it more patient-centric.

Although I am cautious to misquote the Triple Aim and its relationship with patient satisfaction, I do so purposely to try to pickle our overly academic culture of patient care with patient-centeredness.
Posted by Andrey Ostrovsky, MD at 11:42 AM No comments: 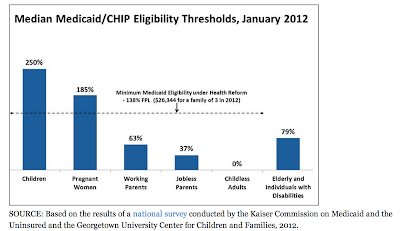 Medicaid expansion, along with several other provisions of the ACA [Ostrovsky], offers an opportunity for social impact through commercial growth. It will be interesting to see the impact on achievement of the triple aim and investment in this space in the years to come.
Posted by Andrey Ostrovsky, MD at 9:16 AM 1 comment: