The Affordable Care Act has created a powerful incentive for health systems to test the value of transitioning from volume to value based reimbursement. Accountable Care Organization (ACO) pilot programs are at the forefront of this multibillion-dollar experiment. An ACO is a coordinated system of healthcare providers and services that are incentivized through reimbursement to improve the quality and reduce the total cost of care for a designated patient population. [1] A major unknown variable in the ACO model is the optimal interaction between ACOs and academic medical centers (AMCs). Depending on the ultimate relationship between ACOs and AMCs, there may be varying degrees of opportunity for digital health startups to add value.

Academic medical centers can either go the route of developing strong relationships with ACOs or operating independent of them in the current paradigm of fee-for-service (FFS) care delivery. And the two potential outcomes of ACOs after the demonstration projects run their course are ACOs either becoming the standard care delivery system or becoming extinct. Below are the implications to digital health startups of these hypothetical scenarios depending on the viability of ACOs and the interaction between ACOs and AMCs.

Interaction between ACOs and AMCs

A major distinguishing feature of AMCs is their specialized inpatient services, which make them suitable as tertiary and quaternary referral sites for less specialized hospitals and ambulatory centers. Specialized or inpatient services may include surgical interventions, intensive care, radiology services, management of multiple comorbidities, and rare disease management, among others. ACOs require access to specialized healthcare services in order to manage complex or intensive medical needs for its patients.

Figure 1: Interaction Between ACOs and AMCs 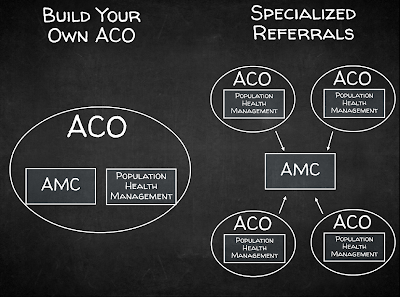 If ACOs Become the Standard Delivery and Reimbursement Model

If ACOs prove to decrease cost and improve the quality of care, they may become the standard care delivery model and the following scenarios could arise depending on the interaction between AMCs and ACOs.

AMCs that choose to never engage with ACOs and continue being reimbursed by the traditional FFS model would loose out on a major influx of referrals. Currently, many AMCs are forming partnerships with outpatient ACOs or providers that may eventually coalesce into an ACO. These partnerships are intended to drive referrals to the AMC. If ACOs become the norm, then the AMCs that bet on the ACO model not working would have missed the opportunity to build the foundation for referral relationships and may end up being crowded out by competitors that did invest in networking with ACOs. The unaffiliated AMCs would subsequently have a very difficult time getting new referrals for tertiary care.

If ACOs become the standard and AMCs do engage with ACOs at an early stage, then the outcomes for the AMC would depend on the type of interaction they developed with the ACO. In the SR model, the AMC would have a strong referral network from the ACO. The financial incentives would be mutually aligned: The AMC would still be reimbursed through a FFS model with likely bundled payments; their incentive to provide high quality care would be to continue getting referrals from the ACOs; and the ACO would be incentivized to refer to the AMC with the best specialized care to optimize management for their complex or acutely ill patients so that more patients would choose to participate in that ACO.

In the BYOA model, the AMC would build its own ACO capacity resulting in competing and counterproductive incentives. On the one hand, the overall ACO mission would be to keep patients out of the hospital in order to decrease costs. On the other hand, the AMC within the ACO would be incentivized to increase patient volume to demonstrate the need for its services. The ACO as a whole would need the tertiary services of the AMC, but the AMC would be a cost center and patients would have the choice to go to other AMCs, which is a separate and complex challenge.

If ACOs Are Phased Out

If ACOs fail to decrease the cost and improve the quality of care, they will become extinct and our health system will likely revert to the existing FFS system. AMCs that chose to never engage with ACOs would be well positioned to continue their current business model without the wasted opportunity costs of interacting with ACOs. Although they may lose the opportunity to increase their network of referring outpatient providers, they would have maintained the efficiency of their existing ambulatory and general services.

If ACOs fall out of fashion, then the outcomes for AMCs would be very different depending on the type of interactions that were established with ACOs. In the SR model, the AMC would have maintained and streamlined its core competency of specialized services. Although the AMC may have to bear the cost of reestablishing its general practice and ambulatory services, it would likely maintain the upside of building a large referral network for tertiary care.

In the BYOA model, AMCs would suffer much greater losses than in the SR model. By building out a population health management infrastructure, the AMC would have created an expensive and largely useless shell for care management. With reversion to a FFS model, there would no longer be a financial incentive for comprehensive population health management and billing would once again be directly managed through CMS rather than the ACO.

On the whole, the best business model for AMCs to adopt is refining their tertiary and quaternary capabilities, slimming down on general ambulatory services that can be provided by outpatient delivery systems, and growing their referral networks from ACOs. This would expose the AMC to the upside of sustainability if ACOs remain in vogue and minimizes their downside risk if ACOs go out of fashion because they retain their core competency of specialized services.

There are major implications of the future of ACOs and their interaction with AMCs on opportunities for reimbursement for digital health companies. If ACOs prove to be valuable and become widely adopted, then there will be more incentive for interventions that 1) improve population health management, 2) keep patients at home and out of the hospital, and 3) facilitate care coordination.

If ACOs fail to be adopted universally, then the reimbursement environment will suffocate startups focusing on value-based care. However, startups that aim to 1) augment workflow management, 2) increase hospital efficiency, and 3) improve aspects of surgery or procedures will potentially benefit from the failure of ACOs.

Generally speaking, the digital health startup community stands to benefit more if ACOs prove to work and become universally adopted. Startups may not only benefit from ACO adoption, but they can also help to facilitate it. In a future post, I will explore the potential for a symbiotic relationship between ACOs and startups and how they can help one another discover value more efficiently with little capital investment if the right innovation environment can be created to minimize barriers to piloting.